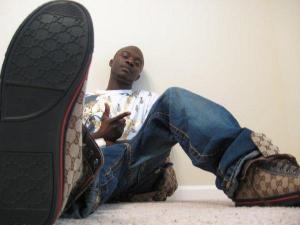 K.E.’s the guy who did “Swag Surfin'”, which for a “who the hell are these guys?” single that no one will remember in three months is pretty amazing. The chorus is one of the best pop-rap hooks of the year if you care about that kind of thing (I do), and it’s basically built around K.E.’s beat, which is as melodic as it is totally flat and thin. Almost all of K.E.’s tracks follow the same template as “Swag Surfin'” with these totally fake horn blasts burying blippy keyboards and drums that sound like he’s poking holes in styrofoam cups, but his reliance on these plastic midi horns gives his beats a real sense of regality and they work especially well as sort-of underdog anthems. These two tracks sound like kids trying to replicate the, for lack of a better term, kingliness of “What You Know” and they succeed in a sense because K.E. is able to make the tinny feel just as huge as a Toomp beat. This stuff is obviously also post-snap, but where “Laffy Taffy” and “Lean Wit It, Rock Wit It” were all about space and clicks and hisses, K.E. beats smush sounds together like a granola bar. He’s great at writing these circular synth melodies that give his songs a melodic underpinning (to be honest they sound kind of like nursery rhymes, but not in the obnoxious way like “Chain Hang Low”) and on tracks like “M.O.N.E.Y.” and “Turn My Swag Up” he reminds me of nu-Jim Jonsin if the guy wasn’t trying to make it on NOW compilations with every song. K.E.’s production aesthetic is very much “of the radio” and yet he has been able to define the sound of underground Atlanta (along with guys like Nard & B) while at the same time having a melodic sensibility that has helped him carve out a sound that is very much his own.